Guide to the top festivals in Denmark 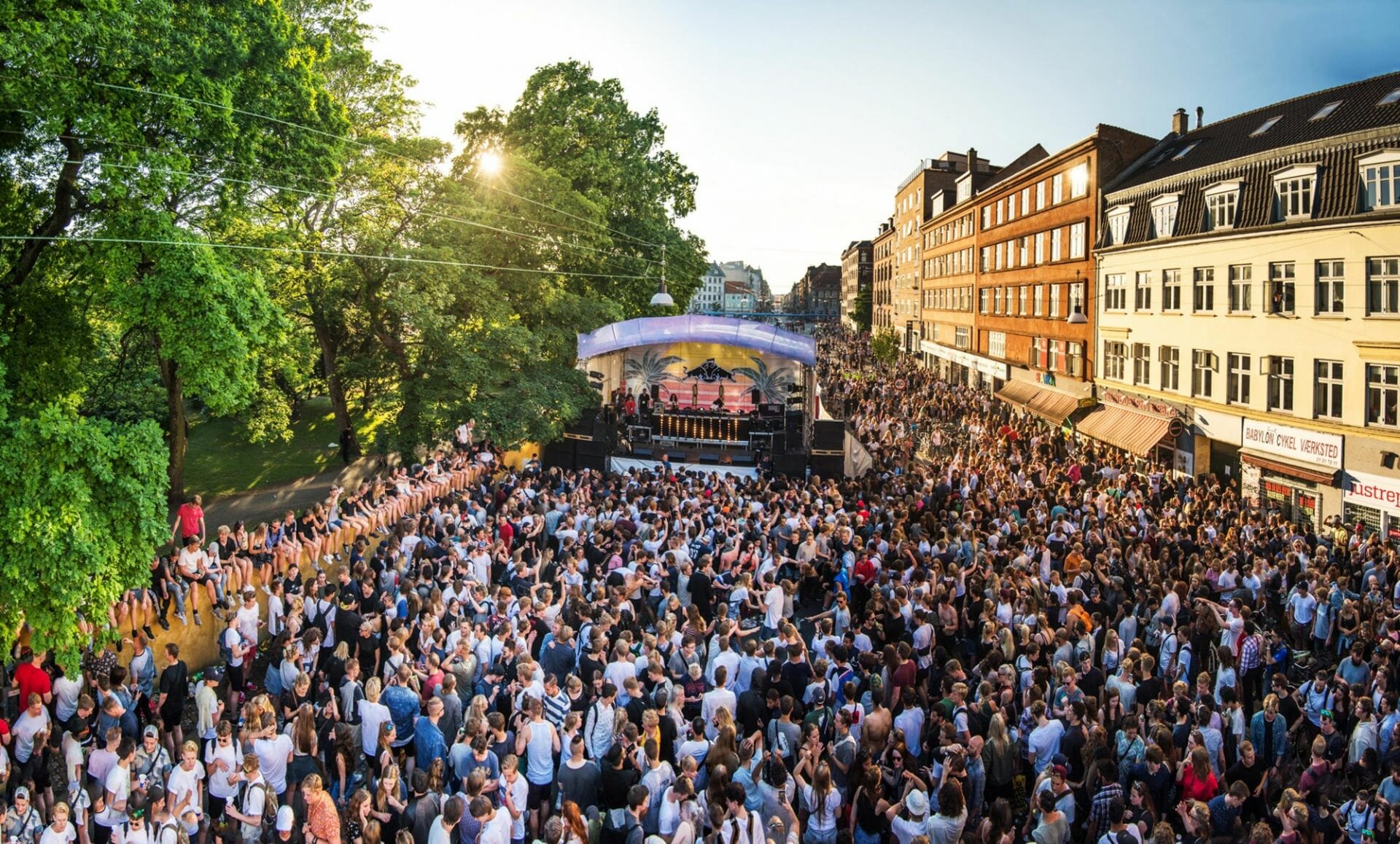 Festivals are a highlight of the summer and something special to look forward for many people. It is a time to relax, let go and have fun whilst enjoying fantastic music, food and events with old and new friends. To guide you through the jungle of the many festivals in Denmark – we have put together a list of 6 popular places, all in proximity to a Zleep hotel in Denmark. On top of that we have an extra tip for those visiting house music fans visiting Stockholm at the end of the summer.

Every May since 1983 there has been a large party in the streets of Aalborg. Today, close to one hundred thousand happy participants join hands and spread joy all across the city. Everyone is dressed in colourful, creative and funny costumes to the pleasure of the many faithful spectators. Every year the carnival is kicked off by the International Carnival Parade, where guests from all over the world proudly showcase their own carnival traditions. Children and those young at heart are officially welcomed the next day when the Children’s Carnival takes place. The entire week’s events lead up to the Carnival Party in Kildeparken with music performances, food and entertainment. Kildeparken is located as a green backyard to Zleep Hotel Aalborg, so you don’t have to worry about partying all day and night and then having to try to find your way back to the hotel because it is very easy. The Aalborg Carnival is definitely an event worth experiencing. The theme varies from year to year, but if you have plans to participate in the parade in May 2019, your outfit should reflect the theme “the four seasons”. We wish you all a great carnival. 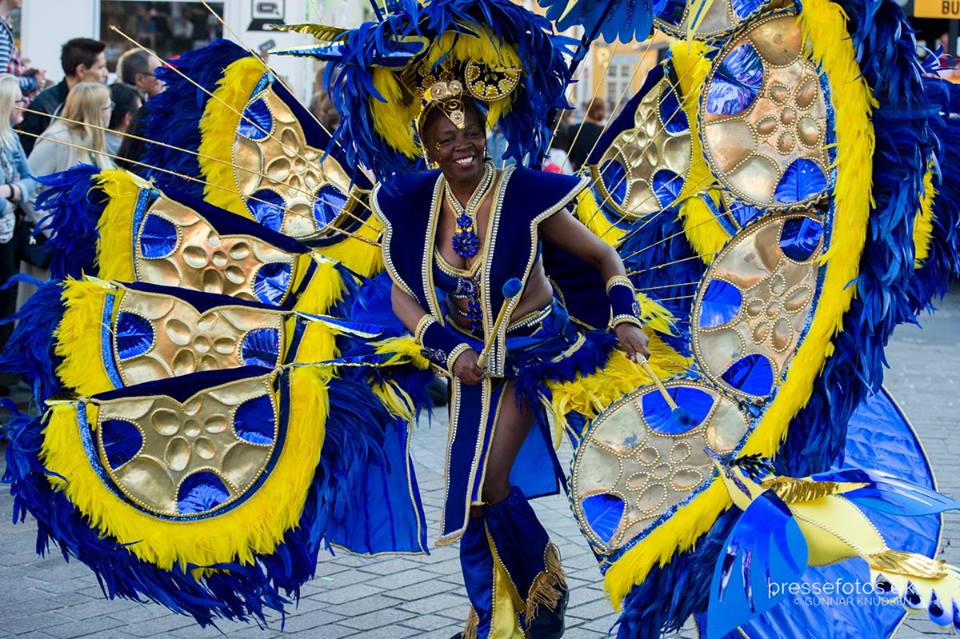 Distortion is probably the most important event of the year for the local Copenhagener. It is a 4-day long music festival taking place on the streets of Copenhagen, where each neighborhood has their own day to host the event. It all finishes off with a grand finale party and new to this year is the ‘Hygge Sunday’ – a chill last day to just relax and regain strength.

It all started in 1998, where the event was an experimental party project. 2 years later it was a 5 day long party crawl through one Copenhagen district a day. Distortion became such a success due to the fact that it was so intimate and full of love. There were backyard grill parties, receptions, events and just general get togethers with between 30 and 200 people at each event. It was the journey through the city that made it so special, everyone could feel a part of it. Today over 100.000 people join the events and it is now know as one of the craziest street parties in the world.

Distortion offers a long list of DJ’s focusing on electro and urban music. There is plenty of modern and social art, night clubs, food stands and of course a wild street life. What makes Distortion unique is that it’s a mobile festival. However it is always in inner Copenhagen, meaning you will always be close to Zleep Hotel Copenhagen City. Spend your night at Zleep to regain your strength for the coming long day filled with activities. 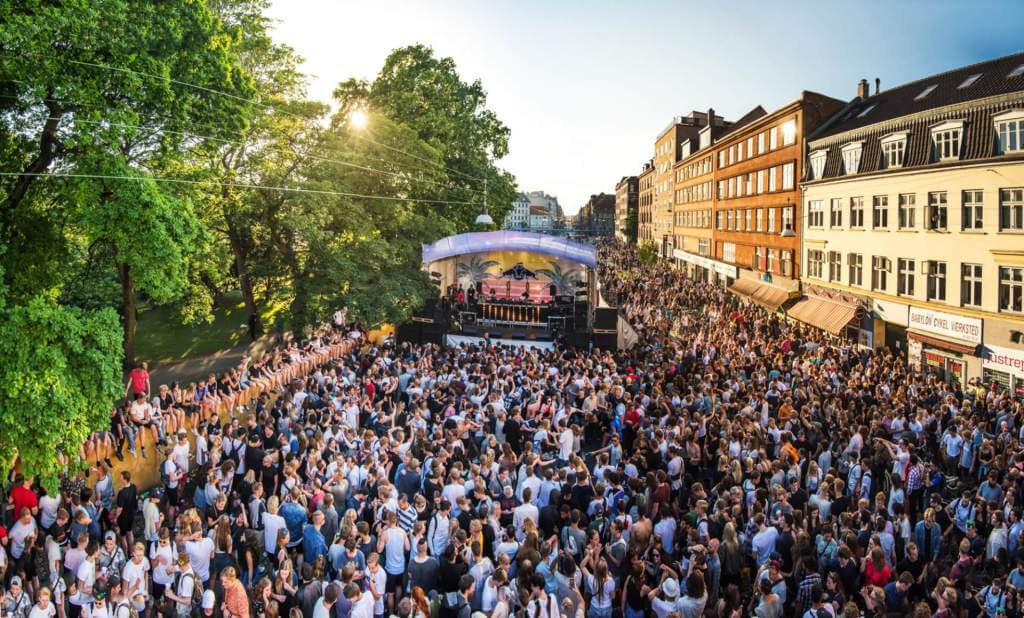 As environment is one of Zleep’s core values, NorthSide festival is one we can’t avoid recommending. Their great focus on sustainability and organic products makes them unique. Currently they offer 100% organic food in all their food stands and over 97% organic drinks in all the bars. New for 2017 was that they cooperated with the sustainability agency WorldPerfect in a project to reuse all collected plastic to make new products, that was used during the festival in 2018. They reached their 2016 goal of recycling 60% of all their waste so now the new goal is to become the first all organic and zero waste festival in the world. They are well on their way.

The festival lasts for 3 event-filled days where 40.000 happy visitors enjoy world famous artists as well as up and coming talents. This year it takes place between the 6th – 8th of June and is located in the outskirts of Aarhus. Zleep Hotel Aarhus Viby is just 4 kilometers from the festival area, and is easily reached with public transport as well as by car.  Our brand new hotel Zleep Hotel Aarhus Skejby is located in Skejby, which is on the opposite side of the city from Zleep Hotel Aarhus Viby, but equally close to the festival. From just outside the door you can easily take the light rail straight into the city. 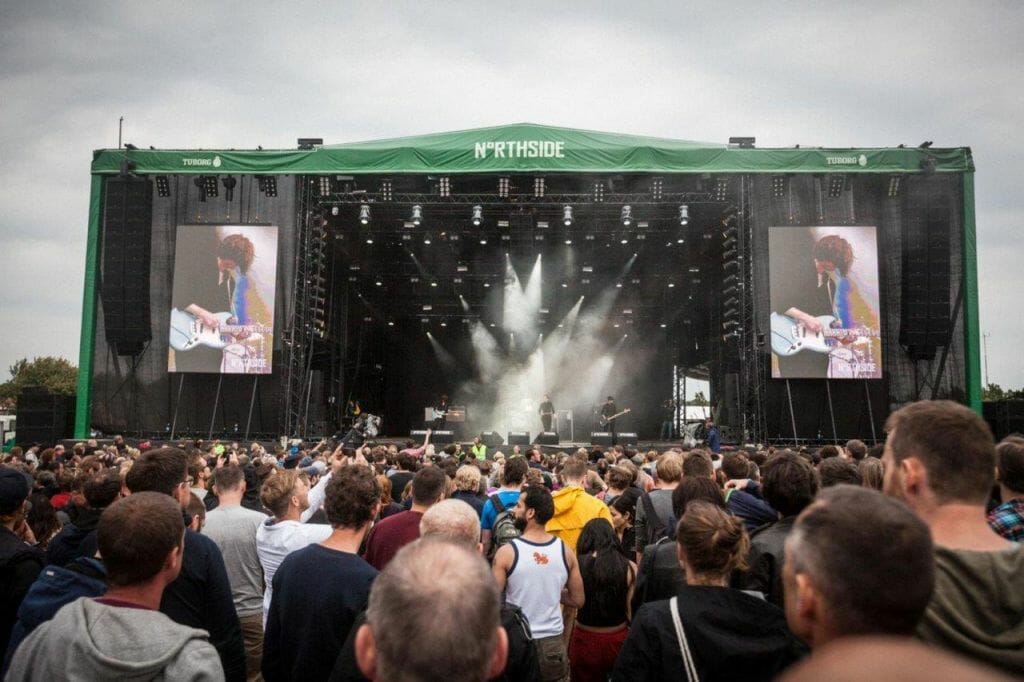 The name itself almost says it all – Copenhell is Denmark’s biggest rock and metal festival, located on Refshaleøen, in Copenhagen harbor. The festival has since 2010 attracted thousands of rock and metal fans from both Denmark and abroad to join together for three days of hell on earth. This year it’s between 19th – 22nd of June 2019.

Last year Copenhell chose to expand the festival with a warm-up day as a starting signal to the three concert packed days. Copenhell’s main focus has always been to create a festival with a high quality line-up, that can be enjoyed by the many. After just 8 years, the festival has spread like a virus through Denmark and Europe and has become a yearly tradition for many. Their vision is to become one of Northerns Europe’s leading metal festivals.

Refshaleøen is an old industrial area that today hosts creative office landscapes, a community center and of course festivals and concerts. It is also where the famous street food concept “Reffen” is located where you will find food from all corners of the world. Refshaleøen is just a 15 minute bike ride away from the inner city, so a stay at Zleep Hotel Copenhagen City is a given choice. You will be close to the festivities but still enjoy a high quality bed at night.

Fun fact: Our CEO and founder, Peter Haaber, has been to Copenhell four times! 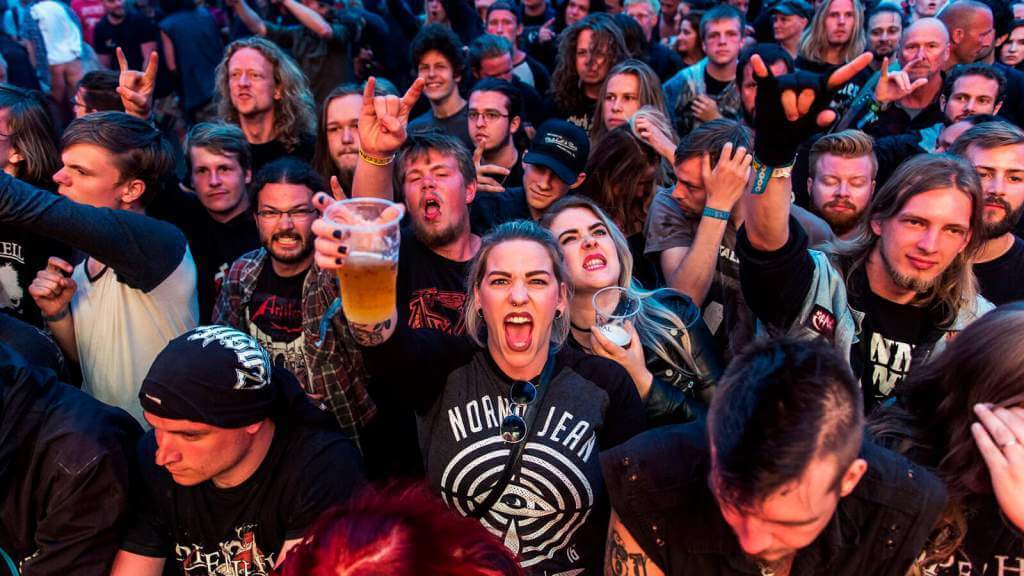 An introduction to Roskilde Festival almost seems unnecessary as it is Northern Europe’s largest music and culture festival, and the second largest one in Europe. It is a festival that gathers people of all ages and all nationalities together for an entire week of concerts, great food, art, meeting new people, and of course partying

The festival started out in 1971 with tickets sold for DKK 200, and received 10.000 visitors. In 2018 they sold out and had 130.000 visitors and 30.000 volunteers and the tickets were sold for just under DKK 2.000. The festival has come quite a long way in almost 50 years. The festival not only offers world renowned artists like Bob Dylan, Metallica, Rihanna and Patti Smith; but also tons of special events, stalls with artists presenting their work, Roskilde Festival Cinema, a skate park, food from all over the world, workshops and much, much more. There is also a live podcast that keeps you up to date on scheduled and spontaneous events going on. Wake up and grab Roskildes’ own festival newspaper where they write articles and review last night’s performances.

Roskilde Festival is a major attraction for people all over the world. But honestly, 8 days of camping? Never ending shower and toilet queues, sleeping on the rock hard ground, suddenly waking up because you are dying of the heat in the tent and garbage all around. Dare to say no! Zleep Hotel Prindsen Roskilde is conveniently located not far from the festival site, and here you can enjoy a comfy bed, a long hot shower, functioning toilet, a healthy breakfast and high speed Wifi, without anyone breathing down your neck. Enter the festival fresh and well rested, ready to party all day!

This year the festival is held between June 29th and July 7th.

The Jazz festival in Aarhus is a yearly event of 8 days where famous international jazz musicians as well as new talents, are invited to perform. This is what makes the festival unpredictable and unique, and has given them a place on the festival map. As any other independent festival, Aarhus International Jazz Festival is always under development. The entire city participate in the 8-day festival, more and more stakeholders join in and the amount of visitors keep rising.

The festival stands out with their marketing as the graphic designer Finn Nygaard is the one who has designed many of their posters. For which he has recieved design awards 6 times. Aarhus is also a city that has been awarded for their cultural achievements; they recieved the title Europe’s Culture Capital 2017, and is sometimes referred to as Denmark’s Paris.

Make sure you are close to the festivities by staying at one of our two hotels in Aarhus. Zleep Hotel Aarhus Skejby is our newest hotel and is easily accessible from the city center with public transport. Zleep Hotel Aarhus Viby is located only 2km from the city center and both hotels offer free parking. This is perfect for you visiting Aarhus International Jazz Festival and want to stay close to the festivities for a great price. 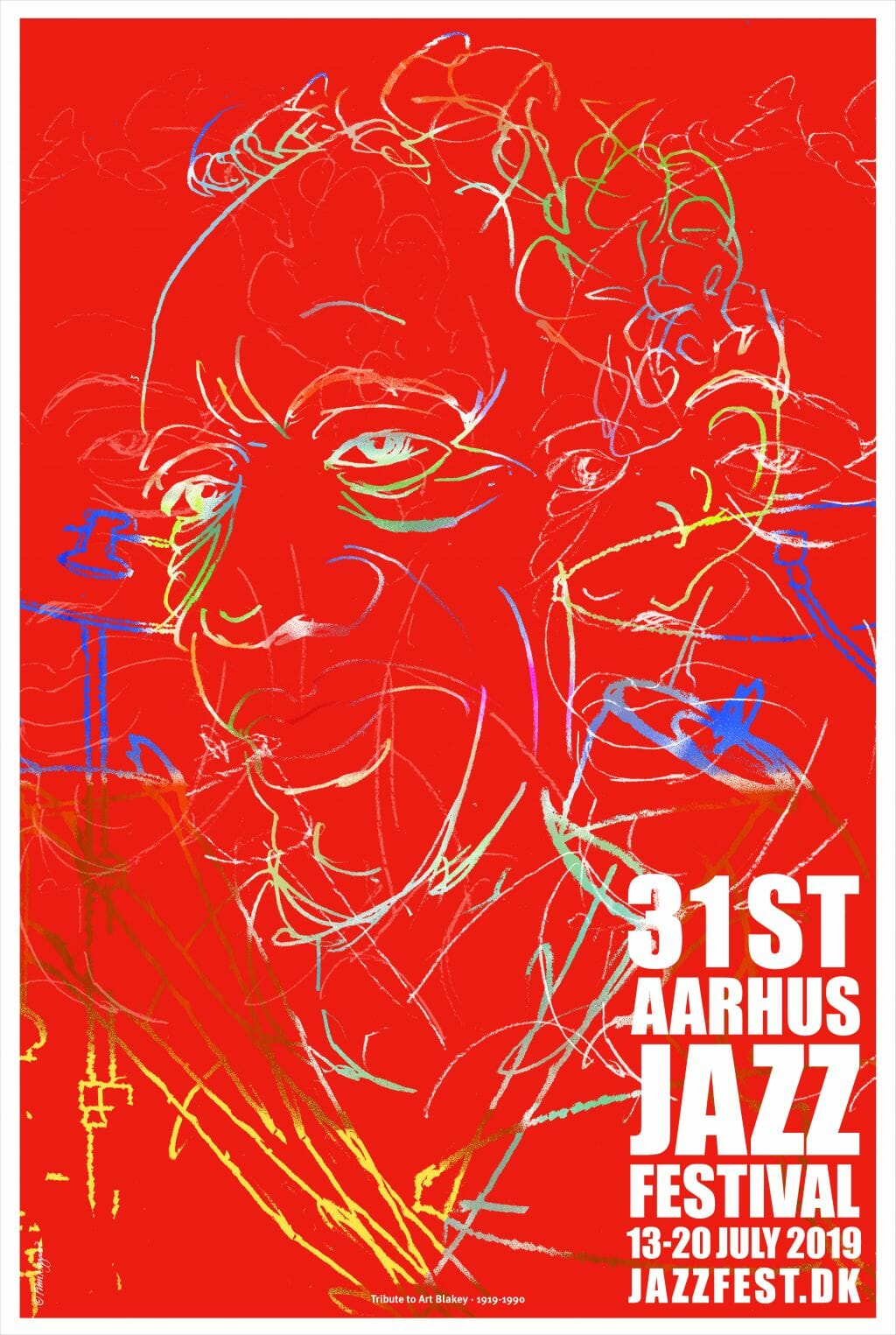 Summerburst is a Swedish festival that focuses on electronic and house music. It started in 2011 as a one day event and was immediately a huge success with artists like David Guetta and Avicii. Over the years they have expanded to a two day festival and are also located in Gothenburg in Southwestern Sweden. The artists continue to be equally impressive with DJs like Calvin Harris, Alesso and Hardwell.

Zleep Hotels opened their very first hotel in Sweden in January 2019. It is located just outside of Stockholm, only 15 minutes from Arlanda Airport. It is the perfect location to stay if you are flying in for the festival and want to stay close to the airport. It is just 30 minutes to get into the city from Zleep Hotel Upplands Väsby.

Summerburst in Stockholm is held between 30th and 31st of August 2019. 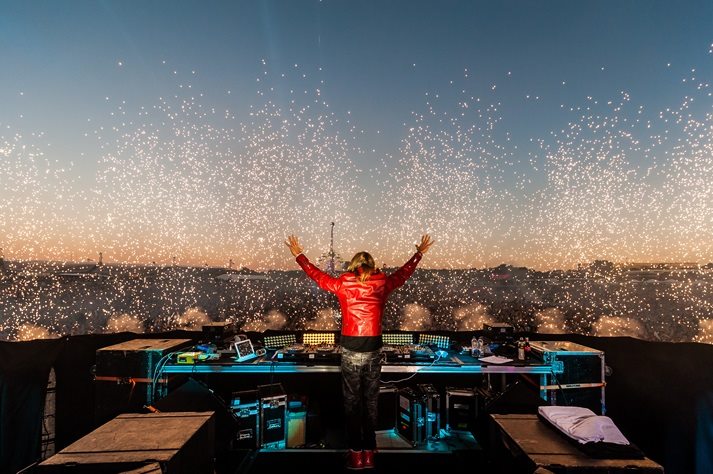 Other hotels near this year’s concerts

It is always much more comfortable to stay in a hotel room with a high quality bed, a functioning bathroom and high speed internet, than to pretend you enjoy camping on the rock hard ground. No matter which festival you decide to go to, we look forward to welcoming you at Zleep Hotels.