Denmark’s first capital, Roskilde, is full of wonderful artifacts and attractions to tell the story of Denmark. The story begins all the way back in the Viking Age, making it abundantly clear why you need to visit Roskilde. But while there is a lot to see, most of the city’s historic attractions are located within a small, concentrated area in the heart of the city. Here, we have collected five of the most historical venues in Roskilde that you should experience.

If you are staying at Zleep Hotel Prindsen Roskilde, you will be living in the city center. From the hotel, you don’t need to plan much to visit the first stop, Roskilde Museum, which is located just 120 meters from the hotel. Roskilde Museum is the city’s culture-historical museum. This is where you need to go if you are interested in learning more about Roskilde’s history and development. The story is told through exhibitions in two of the city’s most historical buildings: Liebe’s farmhouse that was opened by a merchant in 1800 and the Sugar House, a sugar refinery that was built in 1763. In Roskilde Museum’s exhibitions, you will experience one of Denmark’s oldest and most significant cities through archeological findings and new artifacts. The museum has a rich collection of ancient artifacts.

Roskilde Museum was established in 1929. Today, the museum is the foundation of a group of museums. Apart from Roskilde Museum, this group consists of Ragnarock, Frederikssund Museum, Lejre Museum and more. Countrywide, a total of 10 museums have been chosen to take care of Denmark’s protected monuments by the Agency for Culture and Palaces. Roskilde Museum has the honor of exploring, collecting and conveying the cultural heritage from central and western Zealand.

When you step out of Roskilde Museum, continue 140 meters down the road to the right. Here is the beautiful Roskilde Mansion. It was built after the bishop’s residence was torn down. The royal architect, Lauritz de Thurah, built the existing four-winged yellow baroque complex for King Frederik VI. The house was meant to be used when traveling through Roskilde or for royal funerals (the royal family has used Roskilde Cathedral as burial site for hundreds of years). The mansion was used as a place of residence by the royal family for nearly 100 years.

In the beginning of the 1800s, the democratic movement grew in Denmark. This led King Frederik VI to establish the consulting society assemblies in 1834, which was a sort of precursor to the implementation of modern democracy in 1849. The assemblies took place in Roskilde Mansion, and even though they were just consulting, they had large influence until the implementation of the Danish constitution in 1849. After 1849, the Mansion was repurposed for apartments in which many extraordinary personalities have lived in since. Among these is the writer and painter Holger Drachman, who also used to live at Zleep Hotel Prindsen Roskilde in the Prindsen building. Today, Roskilde Mansion consist of three exhibitions: Denmark’s first museum of modern art, Roskilde Art Association in the Mansion wing, and the Mansion collections. Apart from the art museums and the exhibitions inside, Roskilde Mansion’s courtyard, garden and banquet halls are used for concerts and other cultural events.

After Roskilde Mansion, the tour naturally goes to the neighboring building. 60 meters down the road is the UNESCO world heritage site, Roskilde Cathedral. For more than a thousand years, churches have existed on this location. Harold Bluetooth himself – the first Danish Viking king who is believed to have converted to Christianity – built the first of those churches. The construction of the brick church that exists today began in the 1170s and was finished in 1280. The style of the cathedral is very much in line with French cathedrals; something between a Romanesque and Gothic styles. Roskilde Cathedral is truly an architectural masterpiece. 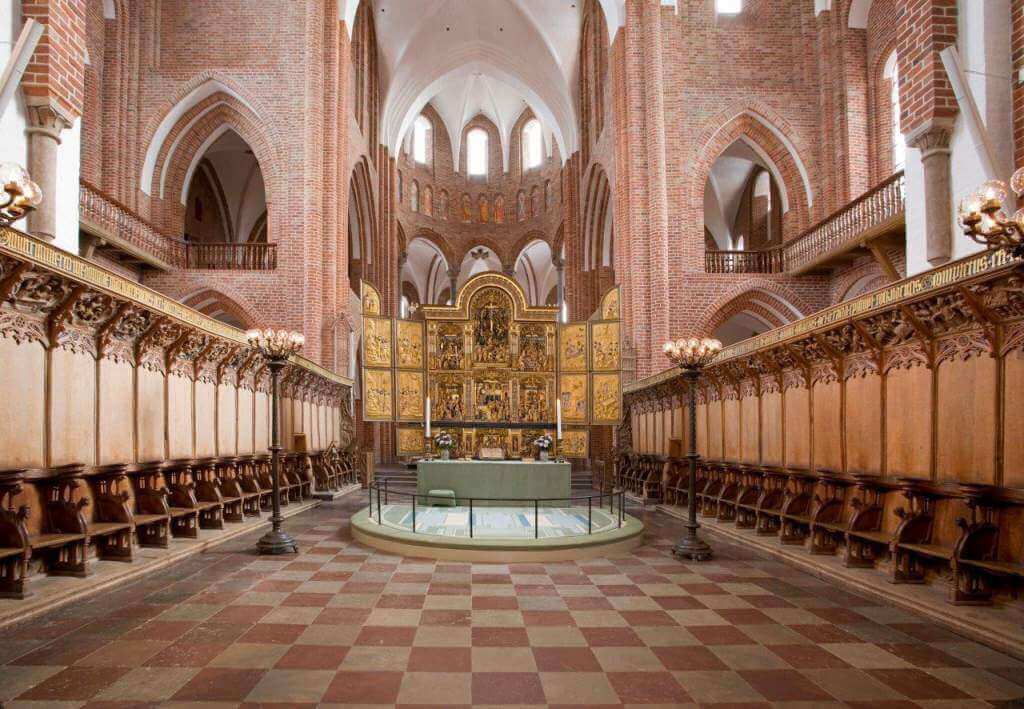 This magnificent cathedral is beautifully decorated, a place truly worthy of kings and queens. It is therefore no surprise then that this has been the burial site of the Danish royal family for hundreds of years. The vaults and the dark crypts house the remains of 39 Danish kings and queens. This makes Roskilde Cathedral the church with the most royal graves in the world. Among others, you will find the tomb of the true Queen of the North (Margrethe the first, 1353-1412). The tomb is decorated with a beautiful and lifelike marble statue of the queen herself.

Roskilde Cathedral is perhaps the biggest attraction in Roskilde. Even the world famous Micheline guide recommends travelers to visit the church. The cathedral is also enlisted as a UNESCO world heritage site and is of course protected by the Danish Agency for Culture and Palaces. This agency also protects the Prindsen estate in which Zleep Hotel Prindsen Roskilde resides. From a few of the hotel’s rooms, you can see the spires of the cathedral.

When you have experienced Roskilde Cathedral, your next stop is the ruins of Saint Laurence Church. The church is located on the same square as the cathedral, you just have to walk 150 meters towards Roskilde’s shopping street. Saint Laurentius’s church ruins is a historical jewel in Roskilde from the beginning of the 1100s. Today, the museum consists of an underground church ruin and a well-kept church tower. The ruins are located two meters below ground on the central square of Roskilde. The church tower on the square is used as a tourist office today. 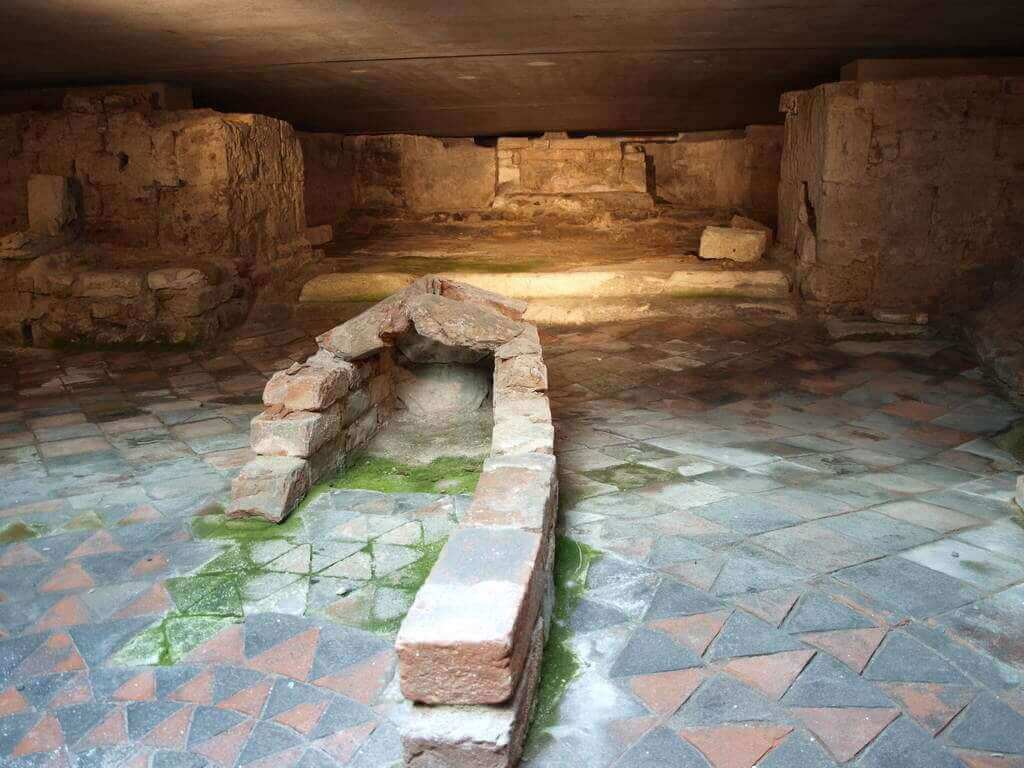 Laurence was among the most popular saints in the Middle Ages. Legend has it that he met Pope Sixtus II while traveling from Spain to Rome. In Rome, Laurence was appointed deacon and treasurer of the patriarchal church. But when the Emperor of Rome imprisoned the Pope, Laurence was asked to turn over the riches of the church. He asked for three days to gather the wealth of the church. In this time, he gave away all the treasures of the church to the poor and the suffering. On the third day, he presented himself to the Emperor and brought forth the poor and the suffering and said, “This is the true treasure of the church, the eternal wealth that is never diminished but forever expanding.” The emperor did not just have Laurence executed but prepared a large gridiron with hot coals beneath it. Legend has it that when Laurence was on the grill, he exclaimed, “I’m well done on this side, turn me over!” Saint Laurence Church was inaugurated in the name of Laurence, and you will a relief of the saint on top of the tower.

You might notice that you have walked in a circle from the outset at Zleep Hotel Prindsen Roskilde. This means that you are still only 200 meters from the hotel. However, now you need to walk a little further. Next stop is the abundantly popular Viking Ship Museum, which is located just 1 kilometer from Saint Laurence Church. The walk takes you through the city park and Roskilde Harbor. So, if you are ready for yet another unique experience, let’s go towards the harbor.

Roskilde’s Viking Ship Museum is the only place in the world where you can get up close to original Viking ships and visit a museum harbor with life-size Viking ship reconstructions. At the museum, you won’t just experience Viking ships that are more than 1,000 years old, you will also learn much more about the Viking Age, marine archeology and the maintenance of the five preserved Viking ships. If you visit Roskilde during the summer, you can go sailing in authentic, reconstructed Viking ships. The museum has built a small fleet of reconstructions, e.g. a long ship, a cargo vessel, and a shipping boat. The Viking ships are just waiting for you to board them and grasping the oars. Everyone is participating actively – by working together, you will be rowing out onto Roskilde’s beautiful fjord. Are you ready to go to sea? Board the ships and enjoy the freedom on the waves. 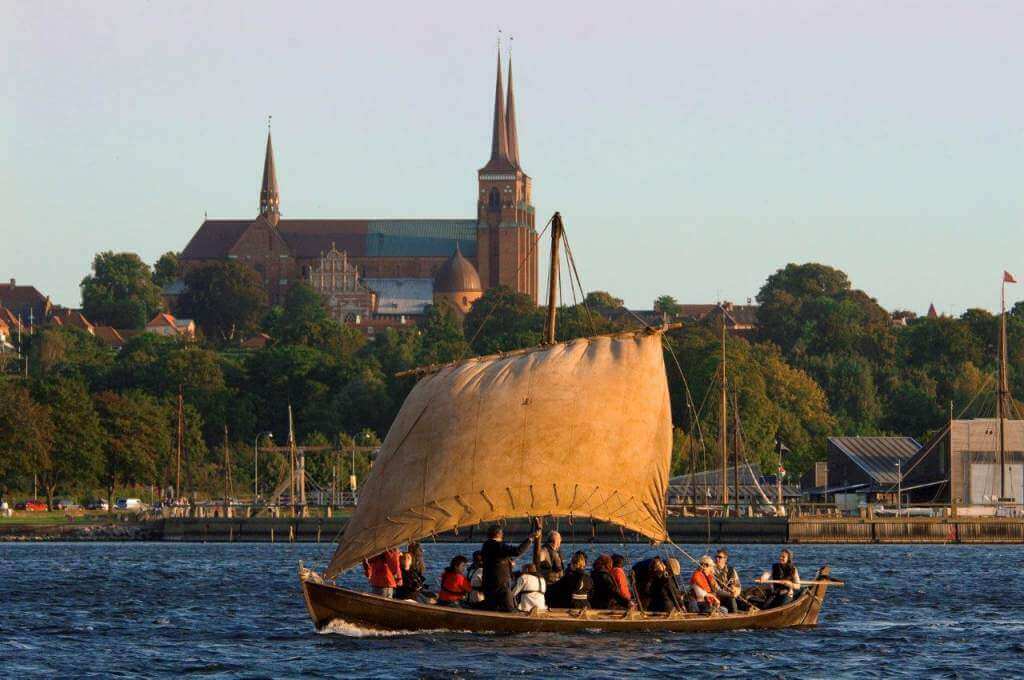 Roskilde Harbor is a natural treasure itself, so after a visit at the Viking Ship Museum, we highly recommend you take a walk along the coast if the weather allows it. The 40 kilometer long coast, which reaches all the way out to Boserup Forest, is home to 30 small islands and islets. The fjord is an EU bird sanctuary due its rich bird and plant life. The area is protected and a Natura 2000-area. The Viking Ship Museum is located in extension to the harbor, where the interaction between humans, ships and the ocean is experienced from ancient times to the Middle Ages to the present.

If you have time to make it through all five destinations within one day, we would be quite impressed. But you would likely also have missed a thing or two. The suggested tour from Zleep Hotel Prindsen Roskilde can easily be split in two days because most of the attractions are located within short distance from each other. If you book a stay at our central hotel in Roskilde, you are near everything.

The hotel is a historic landmark itself and has special meaning to the locals. Its 300-year-long history makes it a remarkable place, a classic location with beautiful architecture. The property in which Zleep Hotel Prindsen Roskilde resides is known as Prindsen, “The Prince,” among locals, and its guest list boasts names such as H.C. Andersen and Holger Drachman. We invite you to come explore the hotel yourself and get a proper historic experience when visiting Roskilde for its history.