In spring 2022 Zleep Hotels is expecting to open the doors to yet another of their popular select-service hotels. This time in the German metropole Frankfurt. Only a month has passed since Zleep Hotels unveiled the chain’s first German hotel project in Hamburg in partnership with co-owner Deutsche Hospitality and now, Zleep Hotel Frankfurt Airport is next in line.

Located by the international airport

The hotel, and its 165 rooms, lobby- and snack bar, fitness room and large parking lot, is expected to open in 2022 and it is no coincidence the location is Frankfurt:

“Of course Zleep is going to Frankfurt. Frankfurt International Airport is Germany’s largest airport and an important hub in Europe. Here, over 1300 flights land and take off every single day – flights filled with potential Zleep guests”, says CEO at Zleep Hotels Peter Haaber about the hotel’s practical location.

More precisely, the hotel will be situated in the city area of Kelsterbach which is only a stone’s throw away from the international airport. 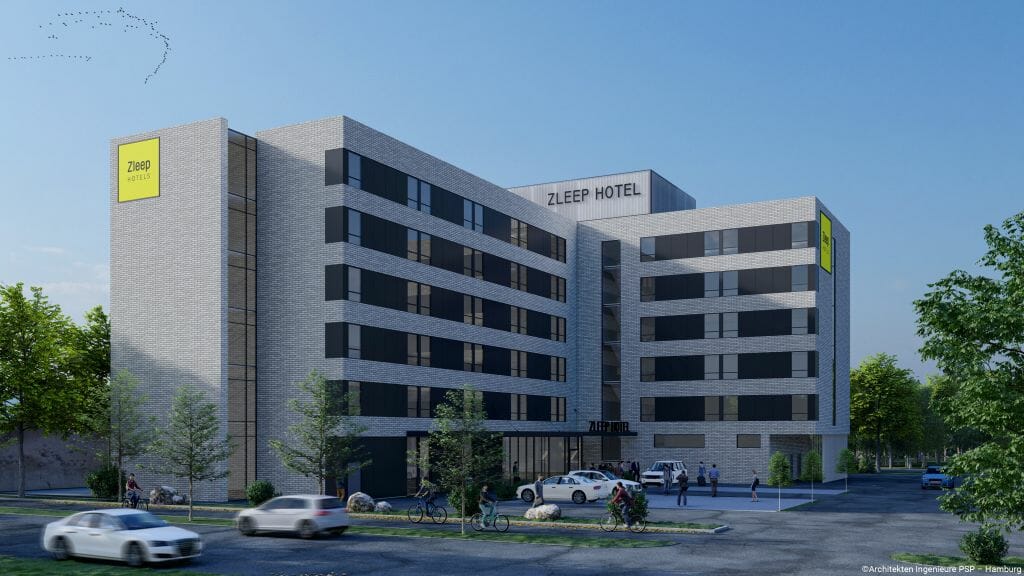 “This location represents a big step within our strategy to establish the brand in Europe on a permanent basis”, says CEO at Deutsche Hospitality Thomas Willms.

Deutsche Hospitality already operates four hotels in the German metropole, hereunder the flagship Steigenberger Frankfurter Hof. It is the German hotel operator’s clear expectations that Zleep Hotel Frankfurt Airport will become a beacon for Zleep as a European brand.

The hotel will be a brand new building which will be constructed in partnership with the property development company Four Points Development GmbH.

“With the concluded lease agreement with Zleep Hotels GmbH for this new location in the Frankfurt/Rhine-Main metropolitan area, we are now adding another important partner to our previous four hotel projects and are pleased to be part of the dynamic development of the hotel brand, which is still young in Germany”, says Claus Spitra, Managing Director at Four Points Development GmbH.

Zleep Hotels is a part of Deutsche Hospitality’s brand family. Zleep Hotels’ vision is to always deliver quality, service and design at a great rate. Today, the hotel brand consists of 11 hotels in Denmark and one in Sweden. A total of five hotel projects are already published and in the pipeline, whereof two open in 2020 in Ørestad and Lyngby, both in Copenhagen. The goal is to operate 40 hotels in 2025. Zleep Hotels is a Deutsche Hospitality brand. Deutsche Hospitality operates four further brands. Steigenberger Hotels and Resorts boast 60 hotels housed in historic traditional buildings and lively city residences and also offer health and beauty oases set at the very heart of nature. MAXX by Steigenberger is a new and charismatic concept which places the focus on the essentials in accordance with its motto “MAXXimize your stay”, whilst Jaz in the City branded hotels reflect metropolitan lifestyle and draw upon the local music and cultural scene. IntercityHotel provides 40 upper modern upper mid-scale urban hotels, all of which are located within easy walking distance of railway stations or airports.